Which begs the question - why?

Nanotechnologists at the University of Glasgow have produced the "world's smallest Christmas card." It can apparently fit onto the surface of a postage stamp 8,276 times, or onto a real holiday card some half a million times. 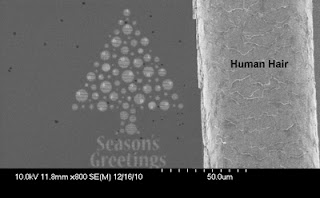 The card is invisible to the naked eye, which will make it even more difficult for your grandmother to put a check into.

By: Josh Sanburn
Posted by Unknown at 13:02 No comments: 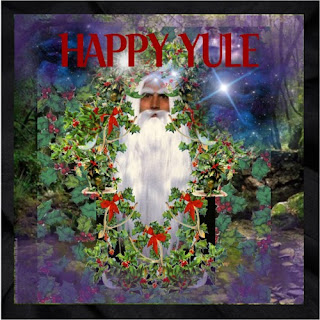 Email ThisBlogThis!Share to TwitterShare to FacebookShare to Pinterest
Labels: yule

We all come from the Goddess chant

We All Come From The Goddess
And To Her We Shall Return
Like A Drop Of Rain,
Flowing To The Ocean

Hear now the words of the witches,
The secrets we hid in the night,
When dark was our destiny’s pathway,
That now we bring forth into light.
Mysterious water and fire,
The earth and the wide-ranging air,
By hidden quintessence we know them,
And will and keep silent and dare.
The birth and rebirth of all nature,
The passing of winter and spring,
We share with the life universal,
Rejoice in the magical ring.
Four times in the year the Great Sabbat
Returns, and witches are seen
At Lammas, and Candlemas dancing,
On May Eve and old Hallowe’en.
When day-time and night-time are equal,
When the sun is at greatest and least,
The four Lesser Sabbats are summoned,
Again witches gather in feast.
Thirteen silver moons in a year are,
Thirteen is the coven's array.
Thirteen times as Esbat make merry,
For each golden year and a day.
The power was passed down the ages,
Each time between woman and man,
Each century unto the other,
Ere time and the ages began.
When drawn is the magical circle,
By sword or athame or power,
Its compass between the two worlds lie,
In Land of the Shades for that hour.
This world has no right then to know it,
And world beyond will tell naught,
The oldest of Gods are invoked there,
The Great Work of magic is wrought.
For two are the mystical pillars,
That stand to at the gate of the shrine,
And two are the powers of nature,
The forms and the forces divine.
The dark and the light in succession,
The opposites each unto each,
Shown forth as a God and a Goddess,
Of this did our ancestors teach.
By night he’s the wild wind’s rider,
The Horn’d One, the Lord of the shades,
By day he’s the King of the Woodlands,
The dweller in green forest glades.
She is youthful or old as she pleases,
She sails the torn clouds in her barque,
The bright silver lady of midnight,
The crone who weaves spells in the dark.
The master and mistress of magic,
They dwell in the deeps of the mind,
Immortal and ever-renewing,
With power to free or to bind.
So drink the good wine to the Old Gods,
And dance and make love in their praise,
Til Elphame's fair land shall receive us,
In peace at the end of our days.
An Do What You Will be the challenge,
So be it in Love that harms none,
For this is the only commandment,
By Magick of old, be it done.
Eight words the Witches’ Creed fulfill:
If it harms none, do what you will.

John Belham-Payne and the Centre for Pagan Stiudies.
They can be found at:
http://www.centre-for-pagan-studies.org/index.htm and  http://www.doreenvaliente.com/
Posted by Unknown at 14:11 No comments: 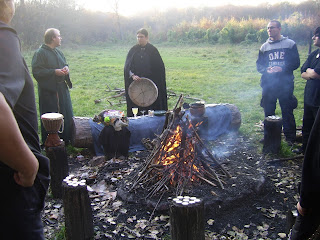 I been drifting along
In the same stale shoes
Loose ends tying a noose
In the back of my mind
If you thought that you were making your way
To where the puzzles and pagans lay
I'll put it together:
It's a strange invitation
When I wake up
Someone will sweep up my lazy bones
And we will rise in the cool of the evening
I remember the way that you smiled
When the gravity shackles were wild
And something is vacant
When I think it's all beginning

I been drifting along
In the same stale shoes
Loose ends tying the noose
In the back of my mind
If you thought that you were making your way
To where the puzzles and pagans lay
I'll put it together:
It's a strange invitation
Posted by Unknown at 05:29 No comments:

Email ThisBlogThis!Share to TwitterShare to FacebookShare to Pinterest
Labels: beck

Our Temple is getting nice and ready

Thanks for all your help!
I'll post some more pics later! 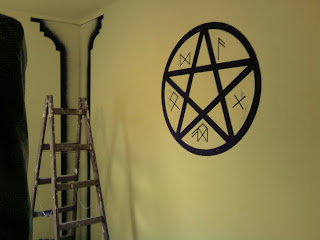 Bright Blessings!
Posted by Unknown at 03:09 No comments:

Perfect to use for ritual cakes!

Lightly spoon flour into dry measuring cups; level with a knife. Combine flour, baking soda, and salt in a bowl. Combine sugar, honey, butter, and oil in a bowl; beat at medium speed of a mixer until well-blended. Add extracts and egg white to sugar mixture. Beat until well-blended. Stir in flour mixture (dough will be sticky).

Cut each log into 24 (1/4-inch) slices, and place 1 inch apart on baking sheets coated with cooking spray. Press almonds into cookies. Bake at 375Â° for 9 minutes. Cool 2 minutes or until firm. Remove cookies from pans; cool on wire racks. 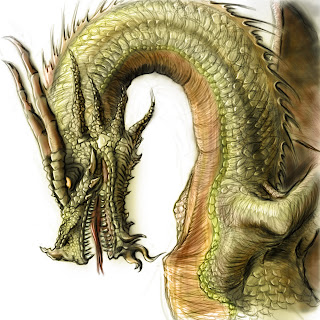 Thank you Viktor!
Posted by Unknown at 11:43 No comments:

The Moon is the natural satellite of our planet Earth .Generally the Moon is 384 400km far from the Earth,its speed is about 3700 km/h.It circle rounds on an elliptic orbit around the Earth.It takes its way in 29 days 12 hours 44 minutes and 2,8 seconds in the Solar system.This is exactly a moon period.It has many figures on its surface but the most spectaculars are the craters.These were arisen by meteorite impacts.The biggest crater is called Bailly it is 270 diameters.
During full Moon policemen,fire brigades,paramedics and ambulance are on much more standby than normally.It is because the effect of the Moon can be felt much more then usually.It influences people, animal, plants. The most conspicuous effect is insomnia. Many people and animal seems to be anxious at this time. The natural water level is become higher than it is normally and plants filled with water. It is useful to drink more water during full moon because it is the best time for capacity for receiving. According to folk experiences at full Moon we can get the best of ourselves in a physical and in a spiritual level.
So it is the best time for magickal practise.
The Moon as it can be seen from the Earth

The other side of the Moon

click 4 bigger pic
Posted by Unknown at 09:43 No comments: 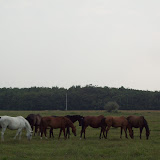 With great pleasure do I present you the first Pagan Camp organized by the Witchblood Community, that will be held betweenAugust (Corn Moon) 13-15.

The camp will be held at the yurt camp at Opusztaszer, Hungary. Those taking part will be sleeping in authentic nomadic yurts (6 people / yurt). The camp is set up just like an ancient nomadic village, thus it's traditional atmosphere is ideal to discover and experience Pagan spirituality and magick first hand. The yurts are open above, so in the night we can look up to the stars, and listen to the soothing sounds of nature, and the horses around the camp.

Our goal at the camp is for everyone to experience Pagan spirituality, to learn about Paganism and magick, and to build personal relationships with people with similar interests. The Pagan Camp is first and foremost about spirituality - we are gathering at this sacred site to maintain our relationship with the Gods, and the spirits.

The first day will be about getting to know each other, although already on this day there will be lectures and workshops where you can participate. When the evening comes, we will sit around the campfire talking, telling stories, playing music, dancing and singing.

On the second day we honor an ancient tradition by holding a ritual for the Gods - this will be the "spiritual climax" of the camp. Our ancestors used to celebrate the Goddess Diana on this day, and the first harvest - a celebration that was recognized everywhere where the Roman Empire was present. We revived this tradition last year with a major ritual, and this year we will celebrate in the camp. During the day we will prepare ourselves for the rite during a set of exercises, tasks, and lectures. At night we continue our celebration around the campfire.

The third and final day is about wrapping up, and saying our farewells. After the last lectures we hold a short closing ritual, pack our stuff and leave. - Opening Ritual
- Sacred drumming and spiritual journey
- On Paganism, the Spirits and the Gods (lecture by Cornelius)
- On the Significance of Ritual - (lecture by Cornelius)
- Lectures about magick
- Pagan songs and chants
- Martial arts and magickal exercises in the morning
- Creative spiritual tasks
- Purifying Labyrinth
- Harvest Ritual
- Leaping of the Fire
- Closing Ritual

Everyone is welcome who is interested in the Pagan spiritual paths and magick. We are open-minded people - all we ask from you is to be one too. :)

Under 18 parental persmission is required.

What should you bring?

Besides basic stuff (clothing, towel, etc.) you should bring:

- A sheet to keep you warm
- Warm clothing for the night (the yurts don't have heating!)
- Drum and/or instrument (if you can play ;)
- Ritual attire - if you have - if you don't, choose something simple to wear just for the ritual. During the camp we welcome you to wear ritual clothes, or any kind of traditional clothing that adds to the camp's atmosphere.
- Pen and notebook

Other things to know...

In the camp there is electricity, a fridge, and a place to take a shower.

If you are coming, you need to arrange transportation for yourself to Budapest, Hungary, we will meet you there.

Sign up by Cornelius or at the following email address: witchblood.org@gmail.com. When you sign up, we ask you to pay 6000 HUF / 20 EUR / 25 USD by PayPal. The rest shall be paid on the site.

Looking forward to seeing you! THE OFFICIAL SITE OF THE ORDER OF THE GOLDEN DRAGONS 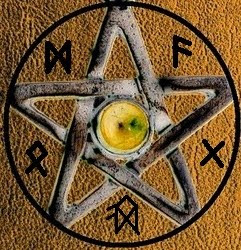 Email ThisBlogThis!Share to TwitterShare to FacebookShare to Pinterest
Labels: zene

What it's all about

The Order of the Golden Dragons
Is a wiccan tradition which is based on a universal knowledge of magic.
our main goals are:
-personality development
-to be able to follow the wiccan path on a proper way
-to be able to live in harmony with Mother Nature
This tradition is closed and provides free learning possibilities to our members.
Main interests: ESP, ritual magick, astrology, healing, practical magick, Power usage.
Other projects: mineralogy, folk religions, ancient Egyiptian magick.
Bright Blessings!
Posted by Unknown at 03:16 No comments: